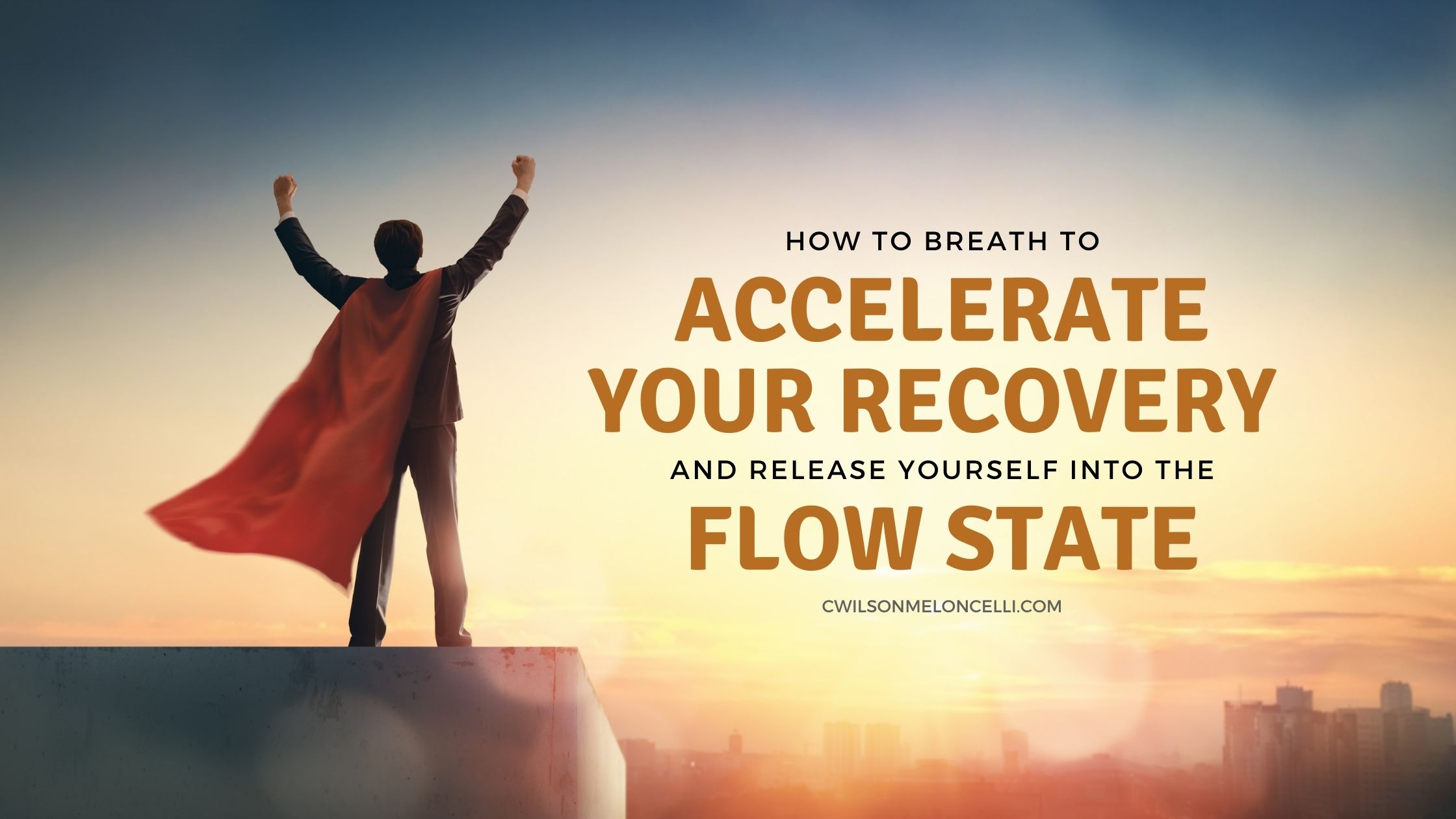 Breathing is the tool that you have instant control over your nervous system.  When you inhale you create a sympathetic response in your system and exhaling creates a parasympathetic response. So with the awareness and practice of this, we can adapt our breathing to match the intensity of the task.

In this article, I am going to share 5 components that will not only boost your ability to access the flow state consistently but will take your health and well-being to a whole new level.

As crazy as this may sound, the biggest problem with a large portion of the population is that they are overbreathing. Overbreathing is like someone is hyperventilating at every moment of the day, but they are not aware of it. It's as if their breathing is trapped, when they are not using their diaphragm and breathing in and out through their mouths. This causes what is called hypocapnia, with mean CO2 deficiency, which in turn leads to cell hypoxia aka low oxygen.

Carbon dioxide (CO2) levels are critical for oxygen delivery. When CO2 increases in your system it combines with water to form carbonic acid which in turn lowers your pH levels (acidic). The lower pH triggers hemoglobin to let go of the oxygen. This results in oxygen being released and delivered more easily to your muscles and tissues.  However, the opposite causes, well the opposite result. CO2 decreases will cause hemoglobin to hold onto more oxygen, not letting go.

Overbreathing and hyperventilation will cause you to decrease your CO2 level, which as you just found out will result in poor oxygen delivery. This understanding of correct CO2 as the trigger for hemoglobin to release oxygen is known as the Bohr effect.

Posture and The Diaphragm

For correct effortless breathing to take shape we now understand that CO2 is our close companion for our success in oxygen delivery. However, make sure we take as full and complete a breath as we can come down to our posture and diaphragm.  If can imagine how a confident person stands up in the middle of a room, compared to a person lacking in confidence. Generally speaking, the confident person will be standing tall, shoulders back and down but relaxed, the chest is open, the chin is slightly drawn back, and the hips are in a natural/neutral alignment. This posture encourages the diaphragm to effortlessly perform. Whereas, when you imagine a person lacking in confidence standing up you will see, rounded shoulders, sunken chest, hips rotated forwards, and chin dropped. This makes sense that there is tension in a closed position when as you can imagine is restricting the diaphragm.

Now, I only used confidence and lack of confident imagery to illustrate posture. But confident people can still have poor posture. My point is that posture plays an important role in breathing with the diaphragm correct.

The diaphragm is your primary breathing muscle and like all muscles, it can be strengthened through training. This dome-shaped muscle is located inside the lower ribs at the base of your chest. During inhalation, your diaphragm contracts and flattens to create space in your chest cavity for your lungs to expand. For this to happen your intercostal muscles, set between your ribs, assist your diaphragm by lifting your ribs to allow more air into your lungs.  You have a backup set of muscles if the intercostals become impaired, including your sternocleidomastoid (the long muscle in the side of your neck), pectoralis minor (the triangular muscle situated at the upper part of the chest), and the scalenes (they elevate the first rib.)

Here are two exercises to give you a feel for the correct engagement of your diaphragm. The Placing the Hands exercise is designed for beginners of diaphragmatic breathing, whereas the Diaphragm Pump serves as a warm-up for your diaphragm, and is a great awareness tool for understanding where and how your diaphragm moves.

Konstantin Buteyko started his medical training in Russia at the First Medical Institute of Moscow in 1946. Part of his training was to monitor the breathing of terminally ill patients. Buteyko’s eye for detail which was guided by his intuition got so skillfully precise that he could predict to the minute the time of death of these terminally ill patients.

Unfortunately, during this time Buteyko was diagnosed as suffering from malignant hypertension, a fatal form of blood pressure which gave him a life expectancy of just 12 months.  With motivation and encouragement from his tutors, Buteyko stood up to the diagnosis and took a deep dive into the research to find a cure. At that time nothing came to the surface.

Buteyko's symptoms continued to decline but his intuition didn’t. He remembered that all the patients he monitored during part of his medical training hyperventilated. In other words, their breathing was too fast and hard, and in general, they were breathing through their mouths. So Buteyko wondered to himself “Am I breathing too much?”.  Instead of sitting in the question, he took action and began to slow his breathing by firstly closing his mouth.

Within five minutes of slow nasal breathing Buteyko’s headache was gone, and his pain in the kidney and heartache was completely gone. To then confirm this insight he took five deep quicker breaths, and the pain returned.

Buteyko’s breathing method fought to break the surface of the science community and in doing so, changed the lives of so many people. One life that was changed was Patrick Mckeown, who has continued to push ahead with spreading awareness for Buteyko’s work. So to summarize, breathe slowly, breathe less, and breathe through your nose.

It was 1772 when the molecule nitric oxide was discovered, but it was not until the 1980’s that the importance of this molecule took shape. Back then nitric oxide was considered a toxic substance, now it is the secret weapon of health and performance. Produced in pretty much every type of cell in your body and is considered the big chief of molecules of blood vessel health.

This is because Nitric oxide is a vasodilator, meaning it relaxes the inner muscles of your blood vessels. This causes the vessels to widen, which in turn increases the blood flow.

“Nitric oxide is released in the nasal airways in humans. During inspiration through the nose this nitric oxide will follow the airstream to the lower airways and the lungs where it increases the amount of oxygen intake in the blood.” – Lundberg J., Weitzberg E., Nasal Nitric Oxide in Man, published in Thorax, 1999.

So this means that when you breathe through your nose, you increase oxygen consumption. The more time you focus on breathing through your nose (until it becomes second nature to you) the greater the amount of oxygen you’re feeding your system.  Therefore as you can imagine, this will boost performance, recovery, health, and sense of presence.

The paper Behavioural and Psychological Approaches to Breathing Disorders, published in 1994, found that when you breathe solely through your nose, you create around 50% more resistance to the air stream than if you are breathing through the mouth. This in turn boosts your oxygen uptake by up to 20%.

“Since nitric oxide is continuously released into the nasal airways the concentration will be dependent on the flow rate by which the sample is aspirated. Thus, nasal nitric oxide concentrations are higher at lower flow states.” – Lundberg J., Weitzberg E., Nasal Nitric Oxide in Man, published in Thorax, 1999.

Yep, sounds like a song from a boy band in the 90s. However, when you incorporate your posture, diaphragm, nasal breathing, nitric oxide, and carbon dioxide levels correctly you will be positioning yourself for a boost in your health and performance. With five things to think about you might get your head on a note. Overthinking could lead deeper into overbreathing. Have no fear, here is the solution. Tape your mouth up.

Yes, mouth tape is the simplest way to practice nasal breathing and work with your diaphragm, nitric oxide, carbon dioxide, and your posture. With consistent practice, you will naturally fall into the correct way to breathe. My suggestion to anyone starting out mouth taping for the first time is to use Myotape.  Designed by Breathing expert Patrick McKeown, this style of mouth tape will safely bring the lips together to support nasal breathing. The first step is to first build your confidence by having tape over your mouth. Then, to really accelerate your recovery, you want to sleep with your mouth taped. 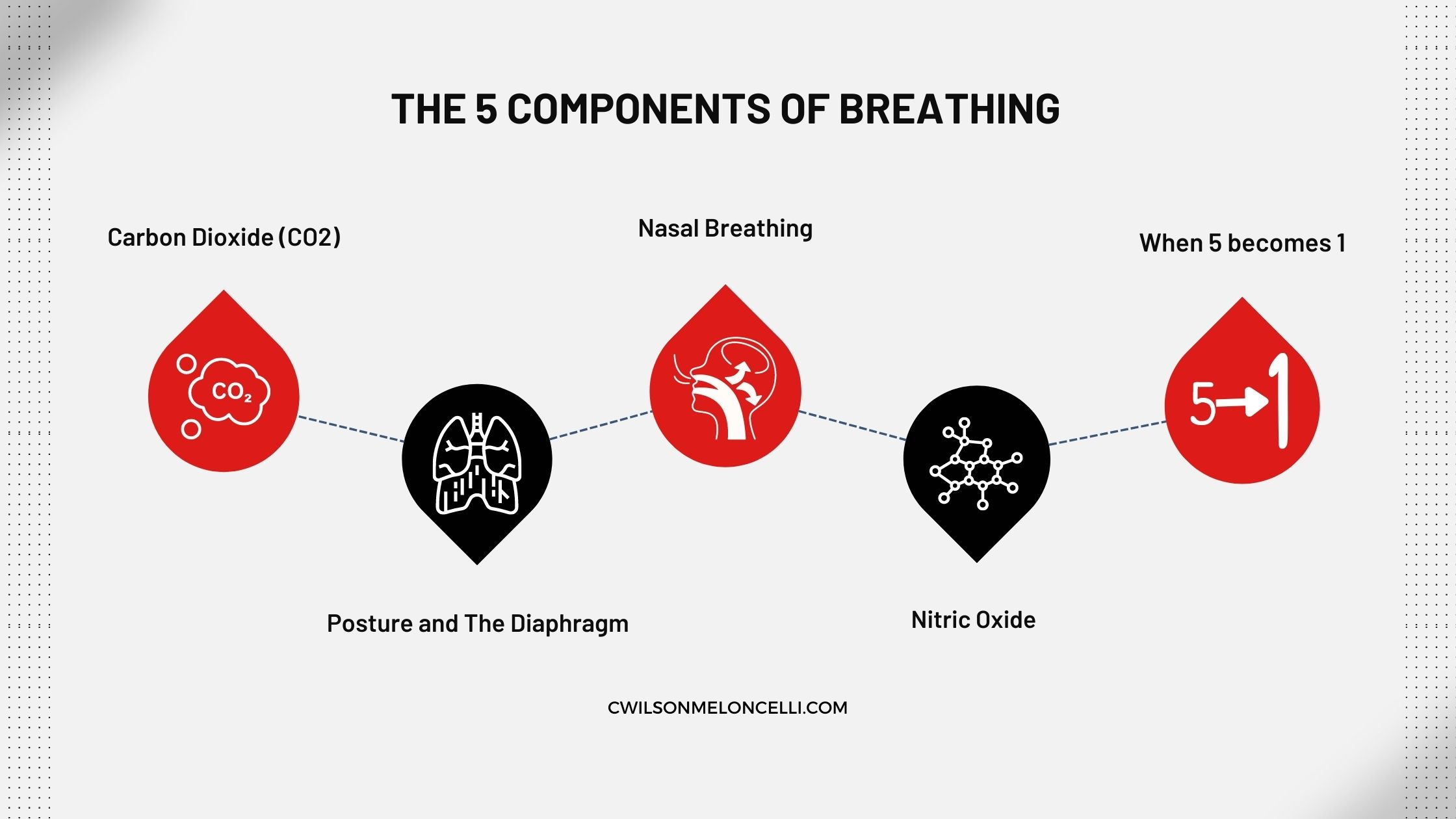 Get 4 FREE COURSES To

(Plus bonus extra courses, tips & content sent to you regularly for free)