4 Major Reasons Why All Basketball Players Should Practice Meditation 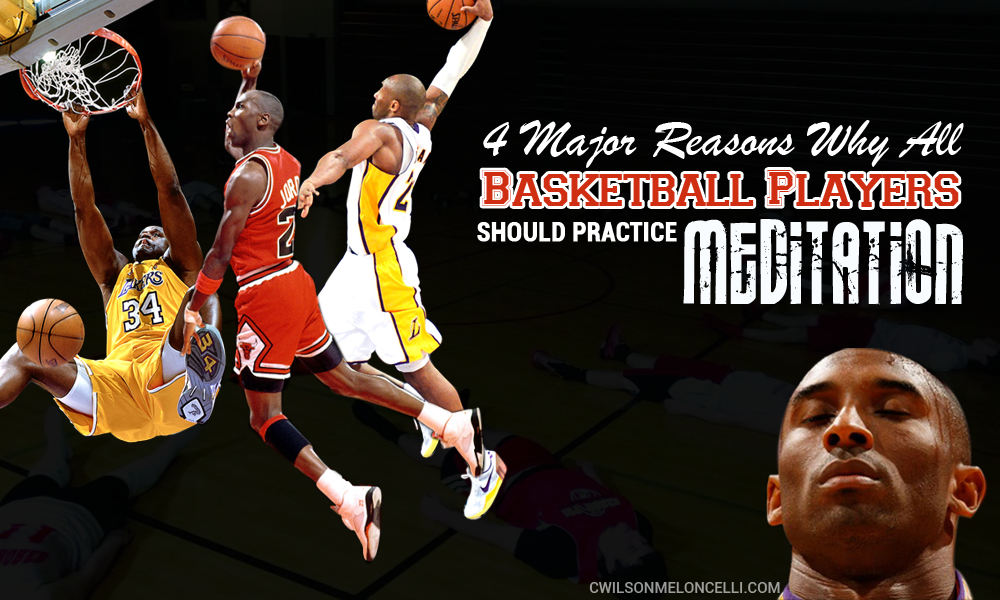 “The crowd gets quiet, and the moment starts to become the moment for me . . . that’s part of that Zen Buddhism stuff. Once you get into the moment, you know when you are there. Things start to move slowly, you start to see the court very well. You start reading what the defense is trying to do.” – Michael Jordan

Yes. Four of the most influential basketball players are doing and have been practicing meditation for basketball athletes since then. These athletes are Michael Jordan, Shaquille O’Neal, Kobe Bryant and the President of the New York Knicks in NBA, Phil Jackson. I’m sure all of us have noticed their astounding basketball skills and multiple championship rings but we never know that they all have the same secret, and that is Mindfulness meditation.

George Mumford may not be a familiar name but if you’re following basketball then you might already know him and have been seeing his work. He’s the mindfulness coach and secret weapon behind Phil Jackson, Michael Jordan, Shaquille O’Neal, Kobe Bryant and many of the most successful NBA Players and teams in the said sport.

Phil Jackson, Chicago Bull’s previous coach, approached him to work with them during Michael Jordan’s hiatus in 1993-1994. The team was a mess, they’d lost their star player and they couldn’t pull it together. Mumford stepped up to the plate and helped them bring the team together. The team improved, and of course, Michael Jordan came back. Mumford then worked closely with Jordan, as he was with Kobe and many other NBA greats. 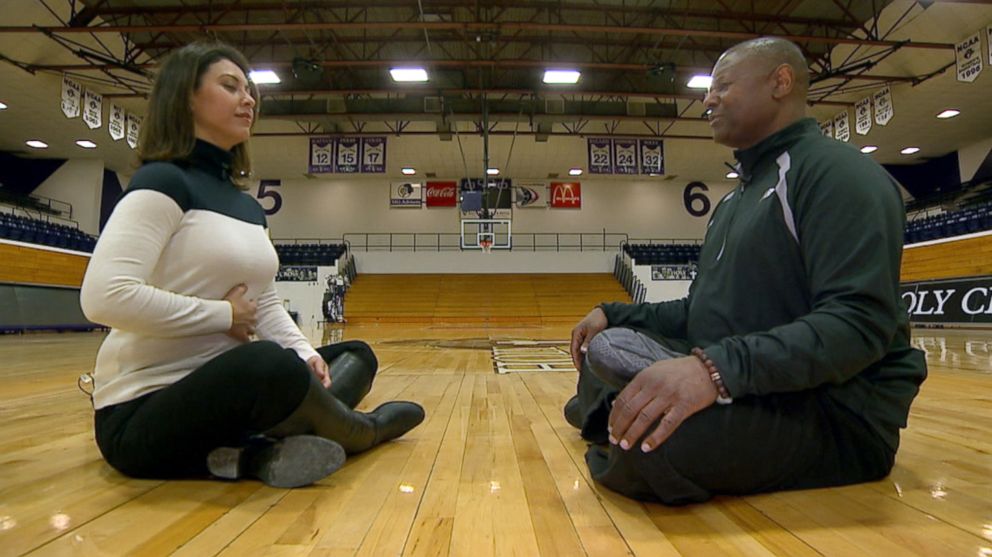 When Mumford was interviewed by ABC News, he talked about how he gets to practice mindfulness meditation for basketball athletes which focuses on breathing and relaxation. He talked about several different concepts he gives to the players, including what he called, “one breath, one mind,” which he gets everyone in the room to breathe together to become one team. He also talked about taking time to perceive what is happening in front of an athlete, such as seeing the basket while standing at the free throw line, and then focusing on the response before acting on it, or what he called “being present”. Mumford don’t want to push distractions away, but instead to embrace them, to become fully aware, noticing and observing everything around him, and then to let it all go; stepping out of his own way and taking the perfect shot.

“When you get in that zone, it’s just a supreme confidence that you know it’s going in. It’s not a matter of if – it’s going in. . . . Everything slows down. You just have supreme confidence. When that happens, you really do not try to focus on what’s going on [around you], because you could lose it in a second. . . . You have to really try to stay in the present, not let anything break that rhythm. . . . You get in the zone and just try to stay here. You don’t think about your surroundings, or what’s going on with the crowd or the team. You’re kind of locked in.” – Kobe Bryant

What are the 4 reasons why basketball players should practice meditation for basketball athletes? Meditation Benefits [Note: Infographic found at the bottom of the article.] 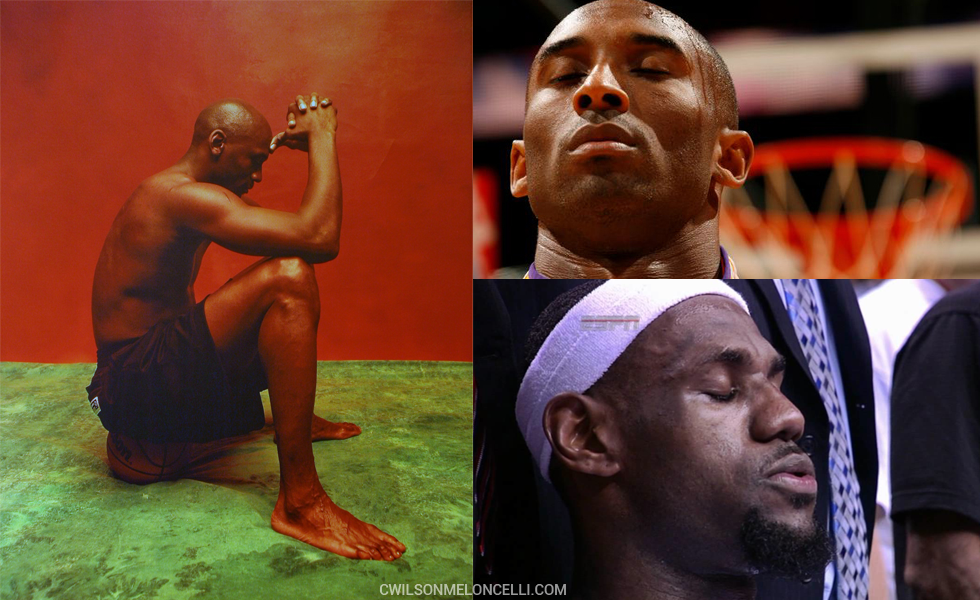 While most of the popular elite athletes practice meditation and attain optimum performance in every game, you can do the same too! You can also do what Phil Jackson, Michael Jordan, Kobe Bryant and Shaquille O’Neal do in their sports by hacking the optimal performance called the Flow State through simple but proven meditation techniques!

By only doing 5-10 minutes of these meditations daily can help you become the ultimate player you want to be.

Now, I am not a basketball player but my skills are set in getting the best out of athletic professionals. I don’t interfere on your game, I only get you to hack into your inner player and guide you to play from there.  When Jordan says “Things start to move slowly, you start to see the court very well. You start reading what the defense is trying to do.” . And Kobe says “Everything slows down. You just have supreme confidence.” They are talking about the Flow State / the Zone. I get people to hack into the flow state at will. Training you in the flow state  off the court so each time you go on the court you are triggered to play in the flow state. I do this through flow activating meditations and physical flow triggering meditations. Exactly like, Michael Jordan, Shaquille O’Neal, Kobe Bryant and many of the most successful NBA Players and teams in the sport.

Are you ready to face the new and improved you? Watch my 50-minute documentary video on How to Hack The Flow State for athletes and get the same results as champion.

“Mindfulness is not judging, but learning from it and letting it speak to you. … we’re not really hearing what’s there, we’re interpreting it based on what we already know, and so part of this is to have the vulnerability to not know and just see what this is.” – George Mumford

4 Major Reasons Why All Basketball Players Should Practice Meditation Infographic

You can find out more about enhancing your Flow state through meditation by accessing my Flow State Free Course Package. Introducing Flow Tutorials, The 3 Step Formula, Instant Flow Meditation and a powerful Flow Triggering Workout. Which I will send to you via email right now (if you desire). Pretty cool right? Well, get your exclusive access now 🙂

Thanks for reading! And subscribe in Flow for more.

Effron, L. (n.d.). Michael Jordan, Kobe Bryant's Meditation Coach on How to Be 'Flow Ready' and Get in the Zone. Retrieved May 23, 2016, from http://abcnews.go.com/Health/michael-jordan-kobe-bryants-meditation-coach-flow-ready/story?id=38175801

This mindfulness teacher gets results (just ask Kobe) - The Boston Globe. (n.d.). Retrieved May 23, 2016, from https://www.bostonglobe.com/magazine/2015/05/27/this-mindfulness-teacher-gets-results-just-ask-kobe/mMYGHRJSziVp4DLq2gAzcJ/story.html