Enhance Your Executive Function By Hacking the Flow!

Your body and mind is your instrument for expressing optimal performance in a task. The quality of the tuning is critical for effortless excellence. And the music we play is called Flow.

As you all know, I am dedicated to teaching people on how to hack into their optimal performance state; the Flow State. I have a real passion for creating Flow State hacking physical and mental exercises, for the simple reason that the more you  practice being in Flow, the easier it is to get into it whenever you want. 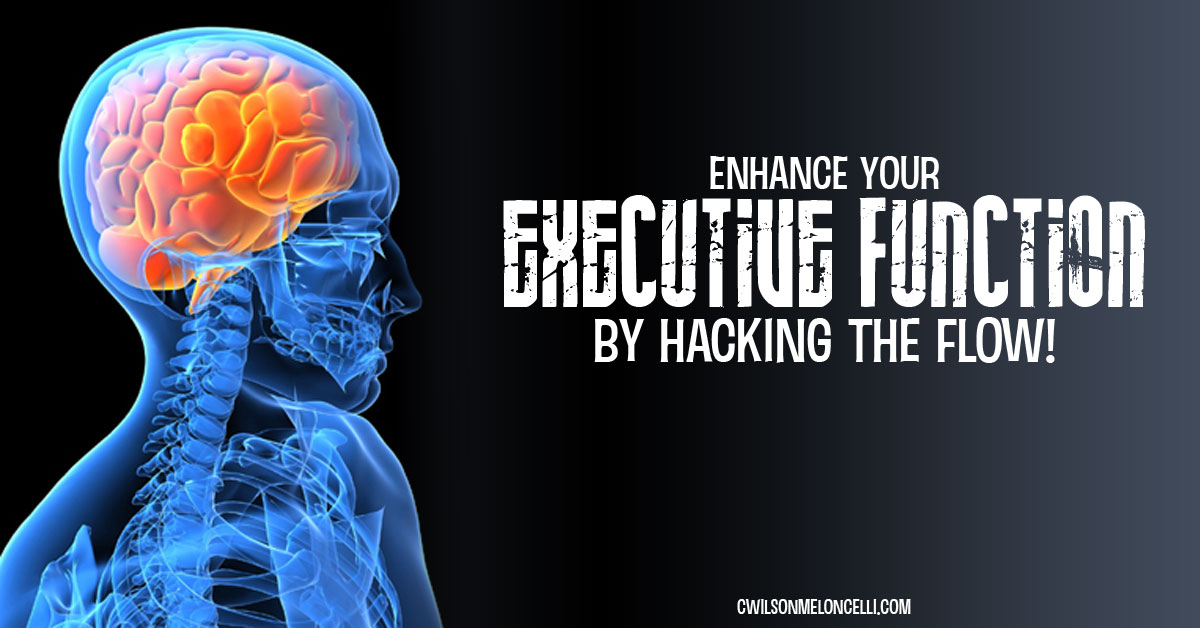 So What Exactly an Executive Function is?

And guess what? The moment you overcome that emotional struggle you’ve had while learning to control your cognitive and supervisory attentional system, you’ve actually overcome the first stage of the Flow state already! Yes, the struggle phase will be all over as you go to the Release Phase.

This also happens during and after the Flow State. When you’re in Flow, your memory is heightened (as you are deeply aware of your surroundings), you are able to focus on the present time and getting the task done.

Building and boosting your confidence will strip the fear or doubts in yourself that keeps you from trying something. This is essentially a good thing since you will be unstoppable, nothing will  hold you back from attaining your true potential and peak performance.

With the help of your flow state training program, you’ll be able to organize and prioritize which lessons you would do first and excel with it. We’ll be able to formulate a perfect plan or program to help you achieve your peak performance according to the best of your ability.

7 & 8. Task Initiation and Organization - This cognitive process is actually connected to the prior one. The moment you develops the sense of organizing and prioritizing your needs,  you’ll be able to initiate performing the task. You can initiate to move, to practice in order to master a certain task or skills. If you have a weak task initiation skills, you tend freeze up since you don’t have any idea where to begin. If you’re organized, he will be able to prioritize which tasks need to accomplish first and successfully manage his time throughout the day.

In fact, the Martial Arts was used by the medical researchers of Adele Diamond Division of Developmental Cognitive Neuroscience to study the effects of physical exercises to the improvement of executive functions for children. The results were astounding. Those children who’ve undergone as little as 20-minute sessions in Martial Arts, Dance or engaging movement based activities  have shown more improvement and better post-test scores than children haven’t undergone these type of activities. The study had emphasized the following benefits of undergoing physical exercises in improving our executive function:

A separate study conducted by UCLA Medical Center at the University of Pittsburgh also shows that physical activities also correlates with larger brain volumes in the frontal, temporal, parietal lobes, including the hippocampus. The patients who have undergone physical lowered down their risks of acquiring Alzheimer’s dementia for about 50%. Cognitive-engaging exercise is known to have a stronger effect in hacking the flow state than non-cognitively- engaging exercise on children’s executive function.Here are the other benefits the researchers found when they incorporated physical exercises (such as Kali) on patients with Alzheimer patients:

Executive Function, also known as cognitive control and supervisory attentional system is a set of cognitive processes and mental skills that can help you process and act on information. There are 8 Cognitive Processes that are connected with the executive functions; Impulse control, Emotional control, Flexible thinking, Working memory, Self monitoring, planning and Prioritizing, Task Initiation and Organization. One way of triggering your flow state and improving your executive function is through engaging in cognitive exercises like Filipino Martial Arts or Kali. In fact, Executive function was already tackled on TEDtalk by Paul McCarthy of cognitive kali and used by the medical researchers of Adele Diamond Division of Developmental Cognitive Neuroscience for children. A separate study conducted by UCLA Medical Center at the University of Pittsburgh also shows that physical activities also correlates with larger brain volumes in the frontal, temporal, parietal lobes, including the hippocampus for Alzheimer patients. All the results were awesome.

Check out this latest flow state course video where we use kali to trigger flow and simultaneously working our executive functions.

You can begin or strengthen your Executive Function right now by accessing my Flow State Free Course Package. Flow Tutorials, The 3 Step Formula,  Instant Flow Meditation and a powerful Flow Triggering Workout. Which I will send to you via email right now (if you want). Pretty cool right? Get your access now 🙂

Thanks for reading! And stay in Flow State for more.